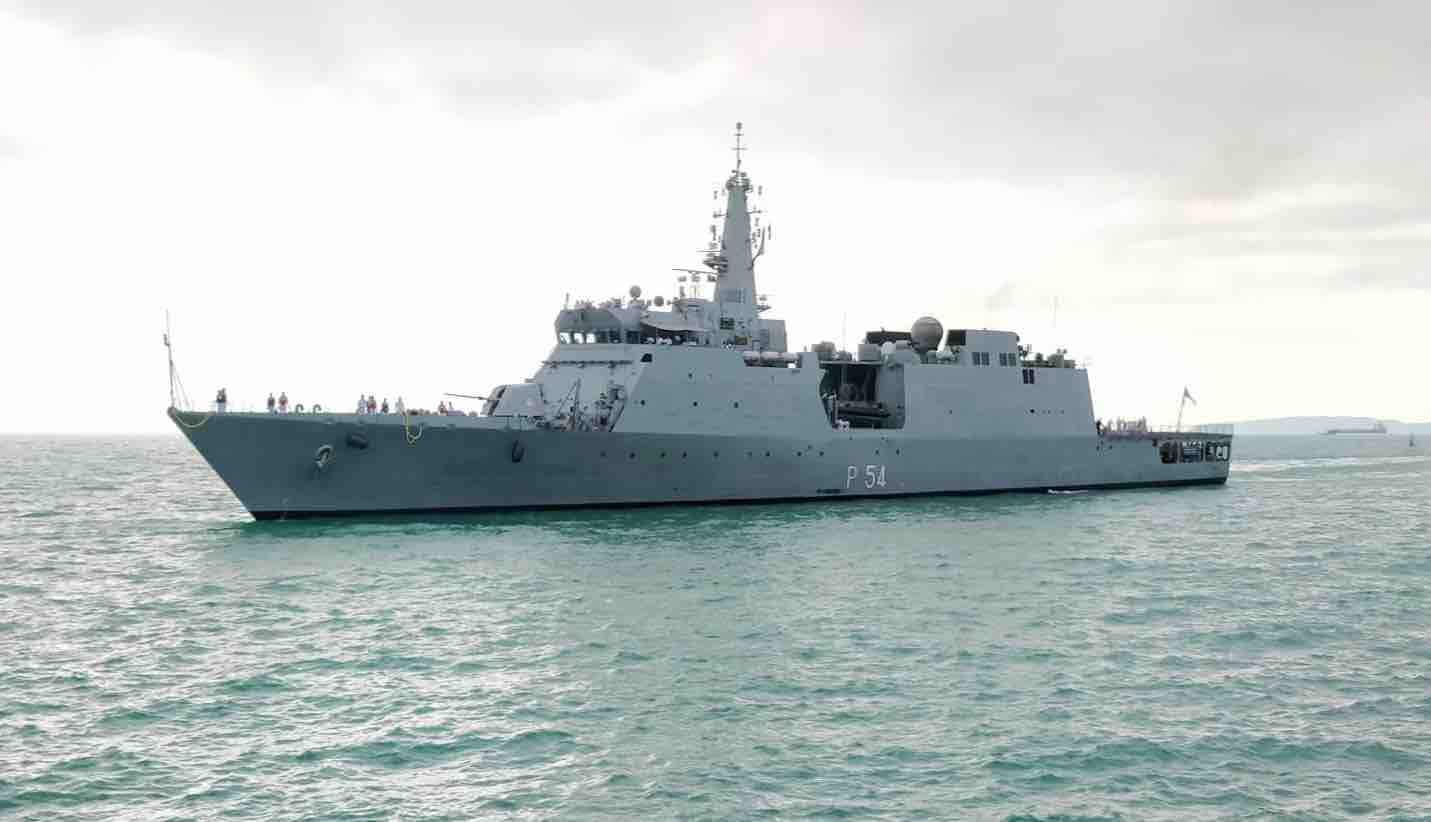 Last Tuesday, the Indian Coast Guard commissioned the eighth ship of an order of 11 Offshore Patrol Vessels (OPVs) that Goa Shipyard Ltd (GSL) is constructing. Simultaneously, Larsen & Toubro (L&T) is delivering another seven OPVs of the so-called Vikram class from its Katupalli shipyard in Tamil Nadu.

These OPVs have two things in common. First, they are designed to patrol long distances, with endurances of 5,000-6,000 nautical miles (10-11,000 kilometres). Second, for such large combat vessels – they are both about 100 metres long and displace over 2,000 tonnes – they are very lightly armed. Each carries just one 30-millimetre (mm) CRN 91 naval gun and two 12.7 mm machine guns.

In comparison, corvettes and small frigates of comparable size carry a far more potent weapons package that can counter enemy threats from the air, surface or underwater. Coast Guard OPVs are negligibly armed, even though the Union War Book mandates that all its ships will come under the navy as soon as war breaks out. That means these vessels should be prepared to participate in full-fledged naval combat.

“The problem of insufficiently armed OPVs has been troubling the navy for some years now. Vessels that displace over 2,000 tonnes must carry sufficient armament to be able to fight,” says former navy chief, Admiral Arun Prakash (Retired).

This apprehension is not just confined to OPVs. Critics of Indian warship design argue that the navy’s capital warships are under-weaponised as well. Adverse comparisons are made between the Chinese navy’s Type 055 Renhai-class destroyers and India’s Project 15B Visakhapatnam-class destroyers. The former, a muscular 12,000-tonnes, carry an estimated 125-135 anti-air, anti-ship, anti-shore and anti-submarine weapons in vertical-launch canisters. In comparison, the Indian destroyers carry just 48 individual missiles.

Senior navy admirals agree the time has come for more heavily armed OPVs that can defend themselves and inflict damage on enemy vessels they encounter. On Thursday, the ministry of defence (MoD) green-lighted the navy’s acquisition of 11 Next Generation OPVs (NG OPVs), which will be significantly more heavily armed than the current OPV fleet.

Yet, the current generation of OPVs, which is likely to remain in service for several decades to come, remains worryingly under-armed. The reasons for this are political and economic, as much as military.

In 1978, the Nari Rustomji Committee was constituted to review the navy’s readiness for its multiple tasks of warfighting, coastal security, counter piracy, etc. On the horizon were the on-going negotiations of the United Nations Convention for the Law of the Sea (UNCLOS). This duly came into effect in 1982, giving India a vast Exclusive Economic Zone (EEZ) of about 2.3 million square km.

That gave India the exclusive legal right to all living and non-living resources out to 200 nautical miles from the coast. To watch over and safeguard these fisheries, oil and gas fields and seabed resources, the Rustomji Committee created a dedicated coastal force — the Coast Guard.

While the Coast Guard was manned mainly by navy persons on deputation, it required vessels suited for law-and-order tasks rather than for combat. The key requirement was enough vessels with the long endurance needed to patrol an enormous EEZ. The existing fleet of Fast Interceptor Craft lacked “sea legs”, so the Coast Guard went in for cheap, lightly armed vessels with fuel reserves that allowed them to patrol at sea for at least 5,000 nautical miles. Maritime surveillance was coordinated with Dornier aircraft.

Meanwhile, the navy was seeking OPVs for a different reason: To use them for a growing range of patrolling missions that did not involve combat. The navy was responsible for protecting the Offshore Development Area – the oil rigs and offshore installations such as Bombay High. In addition, from October 2008, the navy has had to maintain a flotilla for anti-piracy duties in the Gulf of Aden.

“There is no point permanently deploying a capital warship for these tasks, which a smaller, long endurance vessel could do. It makes financial sense to cater for the navy’s non-combat roles with OPVs. When we actually employed them for this role, they proved so useful that, had we possessed enough OPVs, we would have sent only those vessels for this mission,” says a senior admiral.

Naval OPVs can carry out anti-piracy missions because of their greater fire power than Coast Guard ones. However, a weapons package substantially raises the cost of an OPV. An example of the potential savings is the Rs 8,000 crore cost of the 11 NG OPVs that have just been cleared. That same amount would buy just three Shivalik-class frigates.

Navy planners say fitting a 76 mm Otomelara gun, along with its control radar, increases the cost of an OPV by Rs 100 crore. L&T has charged the Coast Guard just Rs 185 crore for each OPV without the gun.

The navy has bought its own OPV fleet, albeit one better armed than the Coast Guard’s. In the end-1980s it entered a contract with Korea Tacoma for seven 1,890-tonne Sukanya class OPVs, which were delivered between 1989-93). Each of these was armed with a 40/60 Bofors anti-aircraft gun and four 12.7 mm machine guns. Each also carried a Chetak helicopter.

These were followed by six Saryu-class OPVs, 2,230-tonne vessels that were designed and built at Goa Shipyard Ltd (GSL) between 2013-14. Each of these was armed with a 76 mm Otomelara SRGM and two 30 mm guns.

For navy planners, the new phenomenon of sea-borne terrorism has changed the rationale of OPVs since the turn of the century. In October 2000, an explosive-laden fishing boat rammed into an American destroyer, USS Cole, killing 17 sailors in Aden harbour. Eight years later, India had its own moment of truth when eight sea-borne Pakistani terrorists entered Mumbai and unleashed the carnage of 26/11. Today, most countries’ naval doctrines mention the contingency of explosive-rigged ships blowing themselves up at the entrance of major harbours and sea bases, closing them for shipping.

Given this alarming threat matrix, Indian security planners are rethinking the conventional Coast Guard model of lightly armed, long-legged OPVs that are geared for patrolling rather than securing, with little equipping for actual combat.

In its visualisation of NG OPVs, the navy is visualising a model that draws from the Littoral Combat Ship (LCS) concept of the US Navy. This envisions a package of mission-oriented weaponry, customised for a particular mission, which can be containerised and fitted onto an OPV that is embarking upon a particular mission. The customised package, which could include missiles and UAVs for example, can be bolted onto the patrol vessel’s deck and utilised when needed.

On return from its mission, the OPV could be prepared for another allotted task with a different, customised mission package.