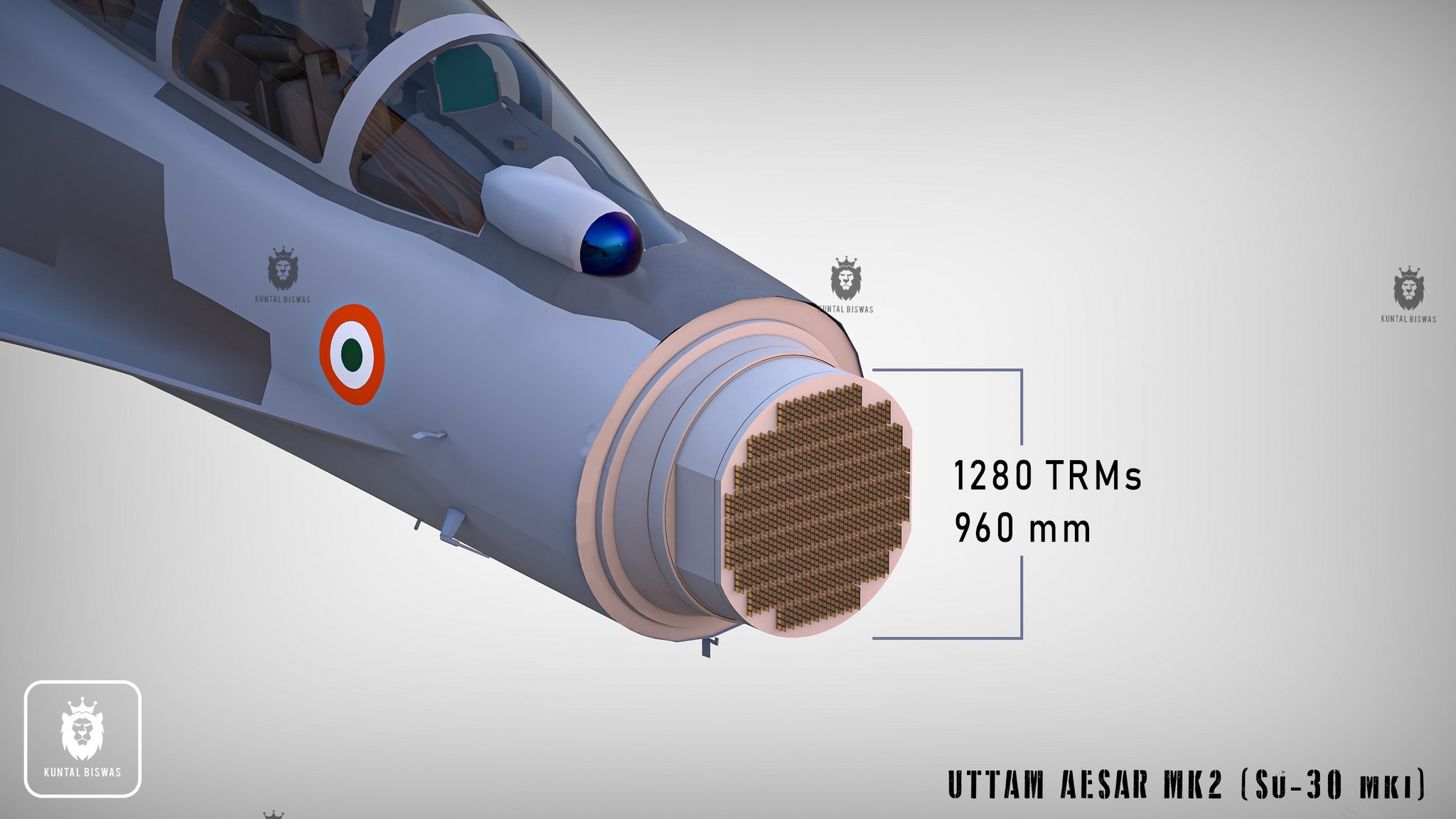 Finally, LRDE’s UttamAESA for TejasLCA starts getting the attention of Indian AirForce. A bigger version with more than a thousand TRMs being asked by users for big boys, especially Su-30MKI.

“Development of AESA radar for Tejas variants has progressed well. It shall be in production in the near future. The core components of Uttam AESA prototypes are coming from the private sector”. Deputy CAS Air Marshal Sandeep Singh.

IAF expects that Uttam AESA will be scaled up for other IAF fighters, particularly Su-30MKI. Stated by Deputy CAS, Air Marshal Sandeep Singh. The first official confirmation that IAF wants to use scaled up Uttam AESA for the Su-30MKI upgrade program.

The Uttam is an advanced active phased array radar (APAR) system being developed by Electronics and Radar Development Establishment (LRDE) for the HAL Tejas and other combat aircraft of Indian Air Force. Development of Uttam started in 2008 and it was first unveiled at Aero India 2009. Uttam is slated to be a successor to hybrid passive electronically scanned array radar EL/M-2032 currently equipping LCA Tejas. Radar is currently being integrated with an LCA.

The important modes of operation of the UTTAM radar system are the surface surveillance and the air surveillance. The sensor has the abilities to search, track-while-scan, priority tracking, high performance tracking, etc. In priority tracking, the targets will be placed in full track mode even if these cross the primary surveillance area. In high performance tracking, additional measurements are made to improve the tracking accuracy. Utilizing active aperture technology, the radar provides a fast-beam agile system that can operate in several modes concurrently.

Uttam features an active phased array (APAR) which gives it superior scanning performance over legacy passive phased array radar. Unlike most contemporary radars, Uttam features Quad TRM i.e. a single plank consists of 4 TRMs. It allows the array to be more densely packed. Each TRM is equipped with low noise power amplifier, built-in test facility, digital phase-gain, and side lobe control elements. The inert model displayed at Aero India 2015 had ~184 QTRMs i.e. 736 TRMs. The array temperature is controlled by a liquid coolant circulation system. The QTRM configuration makes Uttam maintenance friendly. The radar can be scaled up or down depending on antenna size requirement.