‘India is being a coward in lion’s skin’: Chinese mouthpiece on Ladakh standoff 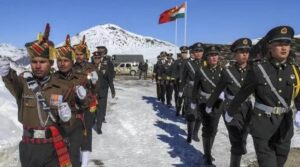 Amid an ongoing border standoff with China, The Hindu had reported that India has served Chinese soldiers a clear message that “pushing back Indian soldiers physically” will not work any more; the publication quoted an official to say that, if the PLA came close, Indian Army will fire.

Chinese Communist Party (CCP) mouthpiece Global Times, in an op-ed, cited the report to state that “such hype only embodies India being a coward in a lion’s skin”.

“The Indian military, or some of its forces, are influenced by nationalist sentiment and the right-wing Hindu nationalist organisation Rashtriya Swayamsevak Sangh, which pervade all facets of Indian society. It may be true that some people want to provoke a war. India has always been calculating on its rhetoric. If the situation is favorable to India, it would advocate that disputes could be resolved by negotiations. This is what happened in early May. But after the skirmish on June 15, when India believed it suffered a loss, the country started to clamor for war. After India’s aggression near the Pangong Tso Lake at the end of August, it wanted to talk to China again,” according to the piece.

The op-ed also stated that China’s ability to send troops, weapons and ammunition, as well as supplies to the border far outweighs that of India and that “if India dares to fire the first shot, it will have no chance to fire a second one”.

At the recent military talks, the Chinese PLA pushed for starting the disengagement process from the southern bank of Pangong lake but the Indian Army conveyed that steps to defuse the standoff in eastern Ladakh should simultaneously cover all the friction points, news agency PTI reported. It also conveyed to the Chinese side that as the standoff began in early May due to aggressive actions by the Chinese troops, they should take the lead in disengaging from the friction points.

The Indian side made it clear to the Chinese People’s Liberation Army (PLA) that any misadventure or aggressive behaviour by it will be met with firmly as India was determined to protect its sovereignty and territorial integrity. Following the incidents, India had occupied at least 20 strategic heights around southern and northern banks of Pangong lake.

In a separate piece, the Gobal Times claimed that “India’s latest tricks of doubling troops at the border and authorising frontline soldiers to fire in clashes with the Chinese army, all while agreeing to de-escalate tensions at the negotiating table with China, could further increase the risk of conflict at the border and lead to dangerous consequences for itself.”