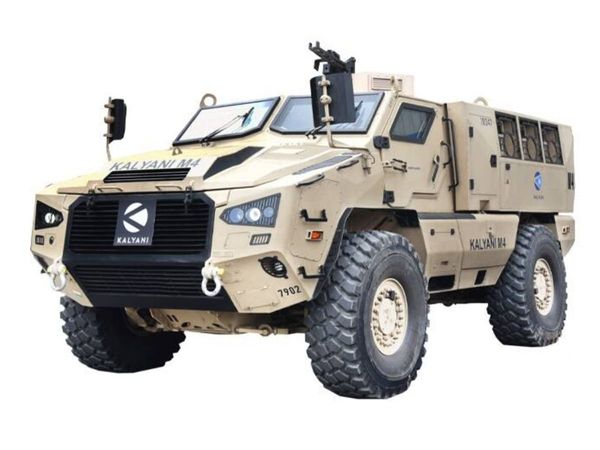 Remember a few days ago, we brought you the news that Mahindra Defence Systems Limited (MDS), Mahindra & Mahindra’s armoured vehicle manufacturing arm had won a Ministry of Defence contract to supply 1,300 Light Specialist Vehicles (LSV) worth ?1,056 crore for the Indian Army fleet? Well, it turns out Mahindra ALSV Armoured Defence Vehicle won’t be the only new vehicle to join the Indian Army’s fleet. Yep, the Ministry had also placed an order for Kalyani Group’s Kalyani M4 armoured vehicles earlier this year. This order, worth ?177.95 crore, came in the wake of the tensions with China; once the vehicles successfully underwent testing in Ladakh, the Ministry placed an emergency order for the M4 armoured vehicles.

Made in partnership with Paramount Group, a South African defence equipment manufacturer, the Kalyani M4 is a multi-purpose armoured vehicle that will be put to work as a people carrier. From what we have learned so far about this vehicle — the Indian Army will use the M4 for transporting troops at high altitudes in regions with harsh climates.

Now, if you are wondering what the Mahindra ALSV defence vehicle will be used for — reportedly to carry weaponry for the Indian Army.

Kalyani M4 reportedly has a maximum payload of 2.3 tonnes and can carry up to 8 people. It also gets a 43-degree approach and 44-degrees departure angle with a water wading depth of 900 mm, allowing it to navigate through all sorts of difficult terrains, which is ideal because it is meant to serve as an extraction and occupant protection vehicle after all.

Oh and Kalyani M4 is powered by a turbocharged diesel engine that, paired to a CVT transmission, generates 465 bhp and 1627 Nm of peak torque.