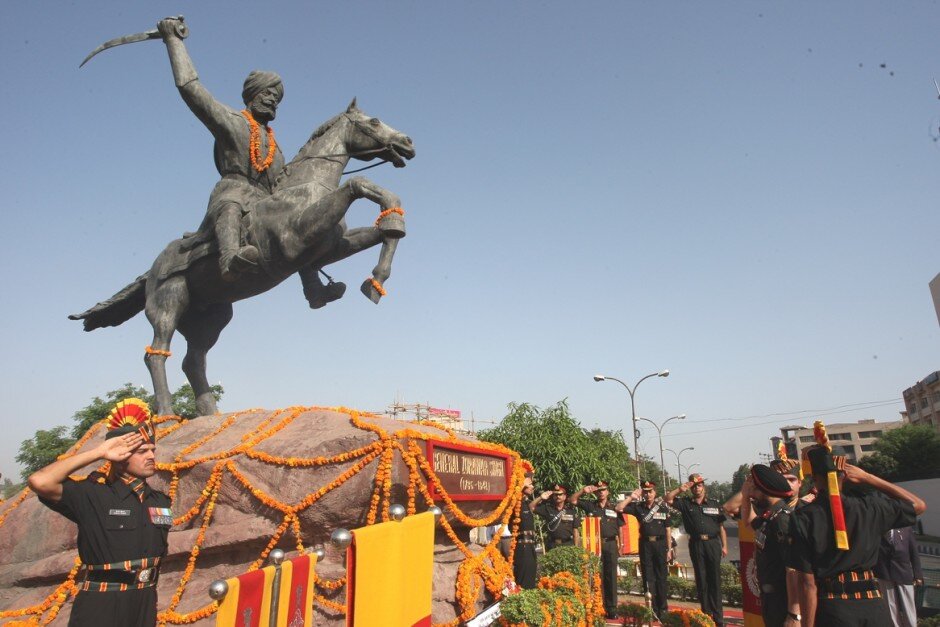 After light refreshment and tea in the dining hall we sauntered outside. Outside the gate, we met a Chinese ‘gentleman’ wearing a three-piece black suit and sporting a shiny embroidered tie. I smiled at him. He smiled back, bowing a little. We shook hands. I introduced myself. He bowed again, his right hand on his chest and spoke very politely ‘Welcome to China, hope your journey was good’. It was suave and impressive English from Wang. Yes, that was the name. We chatted about life in India and China.

In the middle of the conversation, Wang mentioned that a ‘great Indian army General is buried atop that hill’. Taken aback by his statement, I couldn’t understand which Indian Army General could it be. India hasn’t had a war with China in this region. Who? I asked. ‘The great General Zorawar Singh’, came the answer from Wang. Oh my my! He was talking of the events going back some 150 years. I focused my eyes against the sun trying to find any signs of a memorial. My immediate question was ‘Can you take us there, please?’ ‘No. Sorry,’ he retorted.

Wang told us that the Samadhi was shaped like a chorten and the last remains of the Dogra warrior were buried at the same spot by the Tibetan forces with full military honours. The chorten was about three kilometre from our place and about 300 feet high on a hill top. Thanking Wang for the information we took his leave and headed to the shops where everyone wanted to buy small gifts for friends and family back home with whatever cash was left in our pockets.

It is a peculiar rarity that a defeated army honours a General of the enemy army. There is no other similar example in the world. Not just that, the defeated army also raised a memorial to the General killed in battle as also mentions him with great respect in its history. General Zorawar Singh (1786-1841) was one such great warrior who incited fear in the hearts of its enemies. General Zorawar Singh’s memorial or samadhi is venerated even today. Colourful flags flutter over the mound of rocks on a hill in Toyo where he was cremated by his men. Toyo is about four kilometre east from Taklakot.

Also referred to as ‘Conqueror of Ladakh’ and the ‘Napoleon of India’, Zorawar Singh was initially a General of the Sikh Empire. He is honoured for his conquests in the Himalayas including Ladakh, Tibet, Baltistan and Skardu. Born into a Hindu Rajput Dogra family in Kahlur, Hamirpur, Himachal Pradesh, his family migrated to the Jammu region where, Zorawar served under Raja Jaswant Singh of Marmathi. Later, Zorawar Singh was employed by the Dogra king Raja Gulab Singh of Jammu.

Zorawar proved to be a great administrator, a valiant fighter and a strategic Commander of forces under him. The Rajputs of Jammu and Himachal have traditionally excelled in mountain fighting; therefore Zorawar had no trouble in crossing the mountain ranges and entering Ladakh through the source of the Suru River where his 5,000 men defeated an army of local Botis. In 1835 he defeated a large Ladakhi army of Banko Kahlon and forced them to surrender. He built a fort outside Leh. Moving deeper Zorawar invaded Baltistan in the winter of 1839-40 and annexed the entire region as also added a large contingent of Ladakhis to his army.

A year later, Zorawar Singh turned his sight eastward, towards Tibet. In May 1841, with 6,000 men, most of them Dogras, he invaded Tibet. Spreading his men in various contingents, he mounted multiple attacks from various directions marching up to the Kailash Range south of the river Indus. Sweeping all resistance before his men, he passed the Lake Manasarovar and converged at Gartok, defeating the Tibetan force. The enemy commander fled to Taklakot but Zorawar stormed that fort in September 1841. Emissaries of rulers of Tibet and the Maharaja of Nepal, met him in Taklakot asking for reconciliation.

On my arrival at Taklakot a force of only about 1,000 local troops could be mustered, which was divided and stationed as guards at different posts. A guard post was quickly established at a strategic pass near Taklakot to stop the invaders, but these local troops were not brave enough to fight off the Shen-Pa (Dogras) and fled at the approach of the invaders. The distance between Central Tibet and Taklakot is several thousand li…because of the cowardice of the local troops; our forces had to withdraw to the foot of the Tsa Mountain near the Mayum Pass. Reinforcements are essential in order to withstand these violent and unruly invaders’’.

– Records of the Tibetan General defeated by Zorawar Singh <Wikipedia>

Having won the battle, Zorawar and his army went on a pilgrimage to Manasarovar and Mount Kailash. He created a network of communication and supplies over a very large area of inhospitable Tibetan terrain by building small forts and check points along the way. Chi-T’ang fort was built by his men near Taklakot. However, with the onset of winter all the passes were blocked and roads snowed in. The supplies for the Dogra army over such a long distance failed despite Zorawar’s meticulous planning and preparations.

In spite of their best abilities, his men succumbed to intense cold for months, many losing their fingers and toes to frostbite while some starved to death. Meanwhile, the Tibetans and Chinese regrouped and attacked his army bypassing the Dogra Fort of Chi-T’ang. Zorawar and his men faced the joint armies on 12 December 1841. In the exchange of fire Zorawar was wounded in his right shoulder but he continued fighting with a sword in his left hand. The Tibetan horsemen then charged the Dogra position and one of them thrust his lance in Zorawar Singh’s chest, leading to his death.

Six months later during the Battle of Chushul (August 1842) Sikh and Dogra army executed the enemy General to avenge the death of Zorawar Singh.